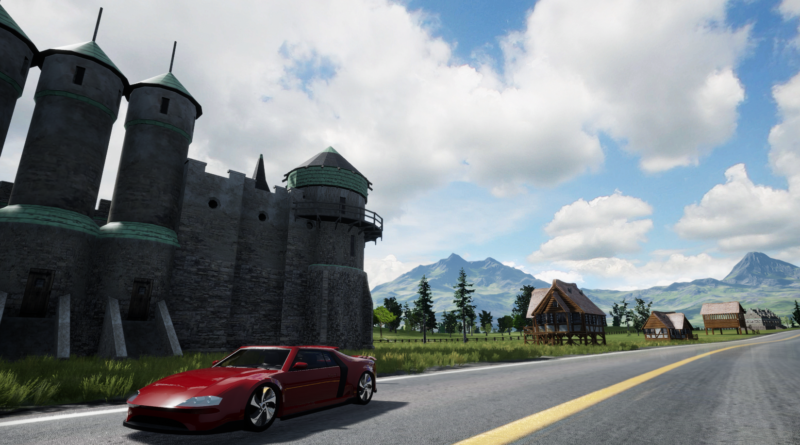 Fictitious Racer is a free racing game for Windows (64 bit). This game received it’s name due to the fictional race track settings that feature various fantasy themed courses such as The Elf Village of North Pole, Hell, Fantasy Forest and several others. Many racing games often focus on real life locations, so this game was planned to shake up the norms and offer a unique experience.

Fictitious Racer is virtually considered abandonware and is an unfinished product. Initially I was wanting to create an entire racing game that would be sold, however I am releasing it for free due to being unable to properly finish the game. There are inadequate funds for the project.

The initial goal was to have AI opponents, more tracks and many cars. However I am a solo developer who mainly specializes in level design. I created these tracks by modifying terrains and creating the roadways (splines). I made many of the road meshes, skyscraper buildings and signage 3D models. Many of the other items were purchased on the Epic Games Unreal Marketplace or were found for free. I was capable of creating a basic menu and six race tracks. I am not talented enough to personally create AI opponents or diverse racing modes; this can’t be outsourced due to lack of funds. The car and time trial logic were purchased from the Unreal Marketplace, I only did some minor modifications to the vehicle performance/physics.

This game is a time trail racing game with one car and six race tracks. I have demonstrated all six tracks below:

This is my first attempt at creating a game, so I don’t have experience with optimizing the game to achieve high frame rates. It is poorly optimized and fails to get 60+ FPS and struggles to hold 30 FPS on most levels, even when using a high end GPU such as a RTX 2070 Super or R9 390. This game was tested on an Intel i7 4770 CPU with 32GB ram with both GPU configurations (RTX 2070 Super and R9 390).

Fair warning it does consume 17GB of HDD space and requires a monster of a PC. This game does require 64 bit Windows. If you wanted to the download this game, here is a link: